The Indo-Pacific will benefit from a historic free trade deal with India. 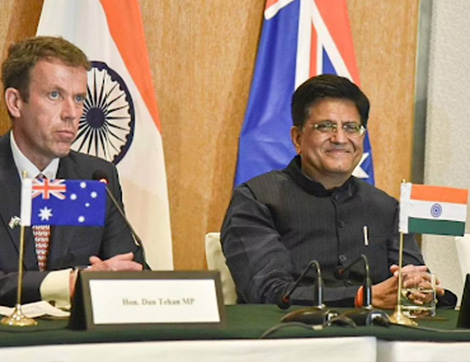 According to Australia’s trade minister, the historic trade agreement with India will contribute to the promotion of stability in the Indo-Pacific region.

The agreement will result in the elimination of tariffs on more than 85 percent of Australian goods exported to India, which are currently worth more than $12 billion annually.

Meanwhile, duty-free treatment will be extended to 96 percent of Indian exports to Australia. “It is a significant victory for our exporters,” Trade Minister Dan Tehan said on Saturday morning’s ABC news broadcast. “We gain access to the world’s largest and fastest-growing economy, which is India.

“By linking our two economies together, it contributes to providing an important counterbalance to the geostrategic competition that we are witnessing in the Indo-Pacific.

According to the minister, “the more we can tie ourselves with India… the better for our long-term future and the better for stability in the Indo-Pacific.”

Tariffs on wine will be reduced as well, and tariffs on products such as coal and metallic ores will be eliminated upon entry into the resources sector as a result.
India will reap the benefits of labor-intensive industries such as leather, gems, and jewellery manufacturing.

“This is fantastic news for lobster fishers in Tasmania, wine producers in South Australia, macadamia farmers in Queensland, and critical minerals miners in Western Australia,” Prime Minister Scott Morrison said in a statement on Tuesday.

‘This agreement is based on our strong security partnership and our joint efforts in the Quad, which has created the opportunity for our economic relationship to advance to a new level,’.

The trade agreement is also expected to have a positive impact on the education and tourism sectors. In terms of professional qualifications, licencing and registration procedures, both countries will recognise the other’s procedures.

Under the Australia-India Economic Cooperation and Trade Agreement (AI ECTA):

Australian service suppliers from more than 30 industries will be assured of the best possible treatment by India in the event that the country enters into another trade agreement with another country.

Working holidays in Australia will also be made available to Indian residents, with 1000 places reserved for them, and the federal government will have two years to put the plan into effect after it is approved.